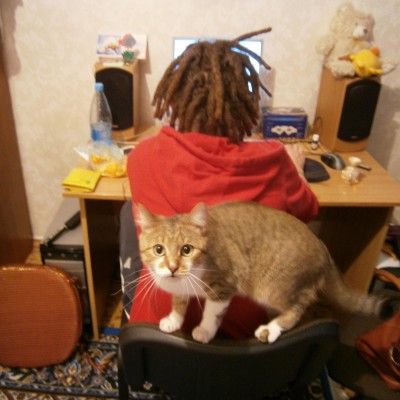 So, I’m 25. And you can call me Coderaiser. I’m active Open Source contributor and maintainer of such projects as Cloud Commander, Minify and Nemizida. This projects not ashamed to show.

Nemizida was written by me a couple yers ago, 7 I think, on x86 Assembly. It’s basic operation system. You could play with it on site.

Minify was written as module for Cloud Commander. It’s combine of js-css-img minifiers which is make life simpler and more funny.

Why am I doing such things? I just like programming and make new products. When I was kid a had played enough in 8-bit games, than in computer games. But I always want to make new things and make the world a little bit batter.

Besides programming I like music, write songs, poetry, ping-pong and outdoor recreation. Thing I like the most is performing own songs on stage. Recently I start playing on Jambe. And by the way this is my cat on a picture :).